This entry was originally posted in January 2018.  I updated one portion of this post which is highlighted in red below:

My Thoughts on Gang Stalking:  It’s More Prevalent Than You Think

When one thinks of street harassment, it usually conjures images of ‘slick-talking’ black (and West African) males with ‘no game’ who are wickedly desperate and therefore force themselves on strangers; or black male sexual predators who believe they can have easy access to vulnerable members of the general population:  women and children.

From what I understand and have experienced, it is a system of people (in my case black “Christians” who work in conjunction with the approving cooperation of low-level whites who are just like them) who seek to intimidate, stalk and eventually dismantle the sanity a particular person.  Persons (male and female) who engage in this conduct are total strangers who harbor ill-will towards humanity, but these people have information about this person that under normal circumstances they should not have; i.e., they are not a friend, employer, family member nor someone that I had transacted any business with.

Targets of gang stalking have spoken out tremendously about their experiences have noted that it includes gaslighting wherein the groups of individuals—who mind you do not appear in groups when they target the person engage in a series of activities intended to cause psychological harm and intimidation.  Other than sadistic pleasure they receive from harming a stranger, they seek to destroy the person based on what that person has that they don’t. Yes, it is primarily based on envy, but there is something more sinister in play:  their goal is to undermine the mind, achievement and talent of their target because quite frankly they do not possess those characteristics nor the wherewithal to achieve them.  I find this acute among black Americans and West Africans.  When they cause harm to their target(s) they will literally laugh and mock them in broad public, give threatening looks, pretend to ‘bump’ into their target to gauge their response to external, negative stimuli (which includes strangers for NO reason walking too close behind you and very audibly “sucking” their teeth or loudly “hemming in hawing” as a means to announce their existence in your presence and hopefully intimidate and/or aggravate you; or pretend to know the stranger in order to legitimize the lack of morals, intelligence and success they have in their own lives.  You will also find that they will provide the same excuse to justify their deviant behavior in both street harassment and gangstalking such as “she crazy” or the variant “I told ya’ll she crazy”, “I ain’t thinkin’ ’bout that b***** ” or “pssstsh you ain’t all that” and “so the f*** what.”  Look at this video especially starting at 29:38:  https://www.youtube.com/watch?v=4jJebz5dsA8.  This is their entire point of harassment and gand stalking towards targeted individuals.  This is often accompanied by an insidious smirk or hysterical laughter which to an ordinary, reasonable onlooker appears to be what it is–out of context of normal social situations and “off.”

Others have indicated far more nefarious motives behind this type of criminality. They indicate that targets are often political dissidents, highly intelligent or are considered non-conformists.  One thing I have noticed with black “Christians” who perpetrate these crimes is that they often sit in their cars or on the side of buildings staring at their target and are always transmitting their observations via their mobile phones to other members of their gang stalking ‘group.’  They are dangerous and evil and agents of Satanic worship; this despite many of them who profess their “love” for Jesus Christ. Many people have awaken to the understanding that the person referred to as demonic will not take offense; those individuals will even laugh at the reference because they know it is accurate. It must be noted that these individuals are usually the purveyors of slander and are reminiscent of their historical black “Christian” predecessors who did the same to much more prominent blacks; just for money, approval by powerful individuals and to satiate the gaping dissatisfaction that fill their lives due to their own personal failings and lack of success. Thus, we can see that gang stalker also perform these acts on the job with the primary desire to rid an individual whom they believe is a potential threat to their own position, status or simply self-worth.  This should be considered a health crisis, but that would require Americans to actually admit the United States is filled with so many narcissistic dangerous individuals that it is better to keep the general populace under the grips of these dangerous persons.

Stalking is, just as harassment, illegal, but it remains a constant reality in American daily life.  It is better that these criminals are exposed rather than such maladaptation of human behavior becomes an ever-growing portion of the normalization of social dysfunction that plagues this country.

Welcome, to Jeopardy: Street Harassment Edition, on the board we have common categories addressing the epidemic of black “Christian” street harassment of others.  Let’s take a look at the board and contestant no. 1, you may choose any category to start off: 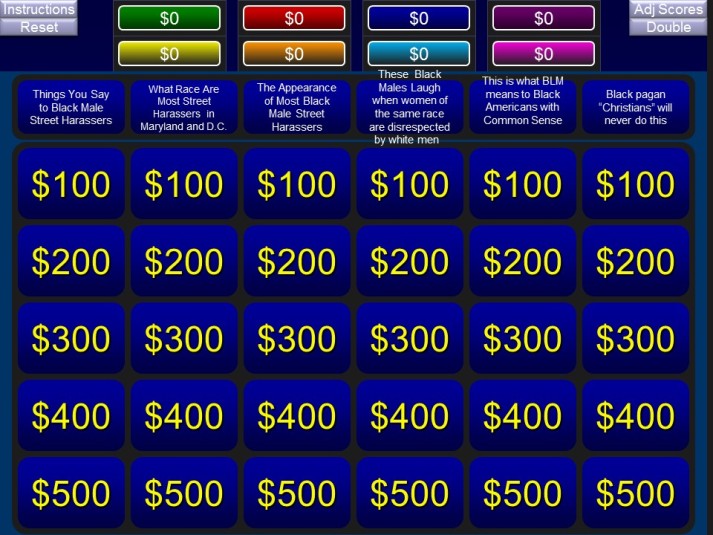 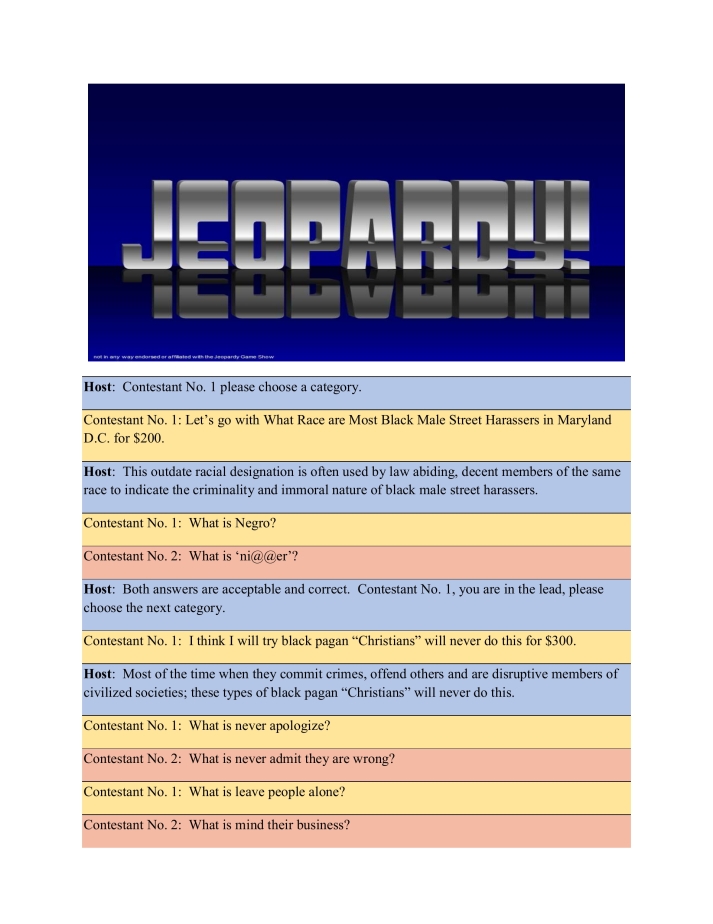 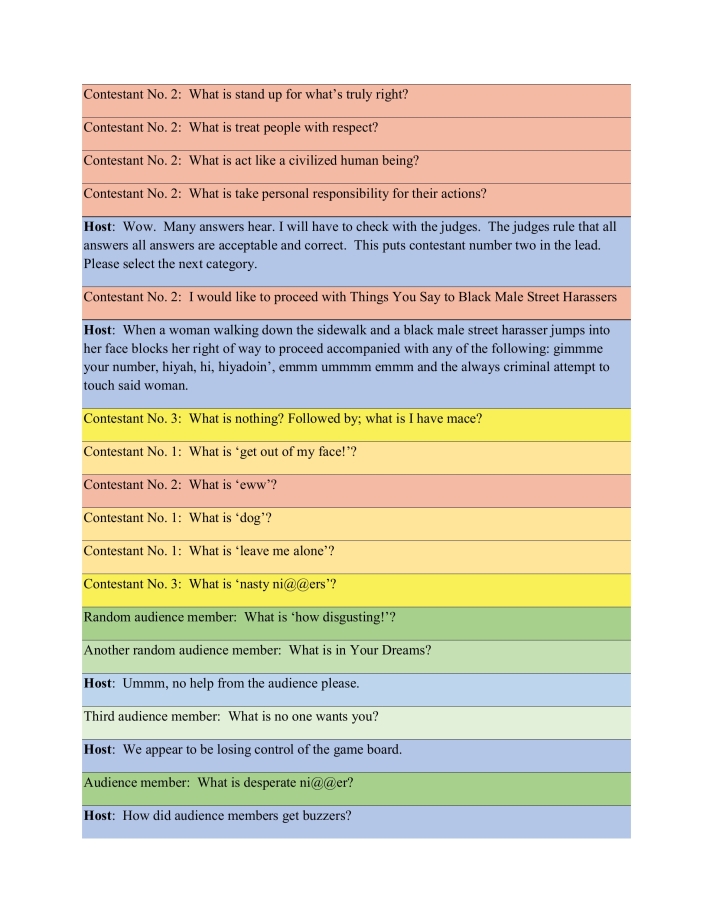 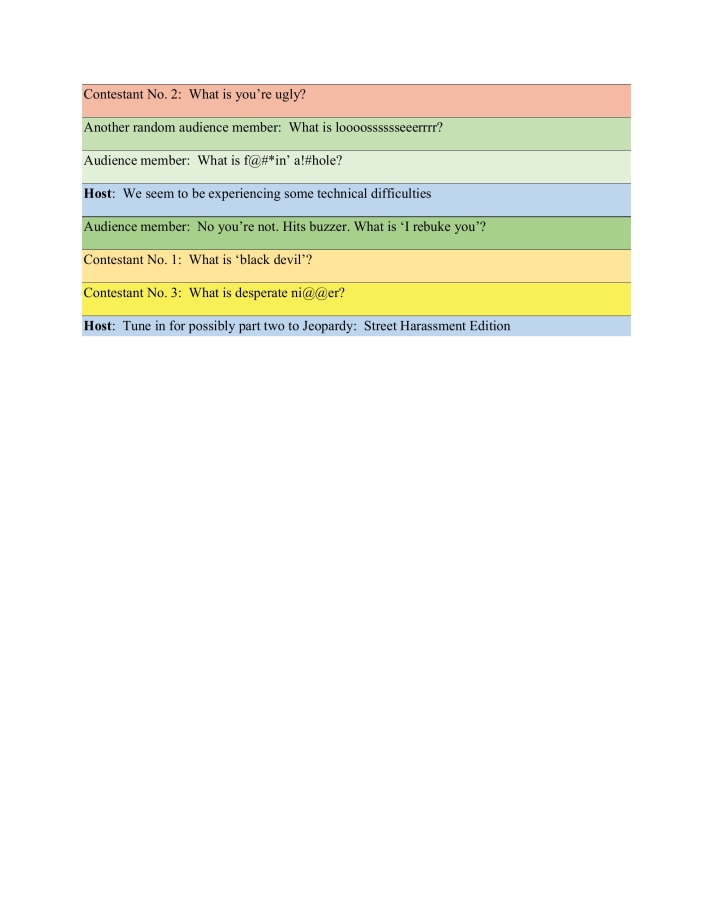