An open letter to Black Men: 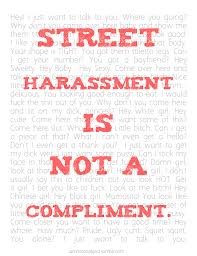 Please leave me alone. I am a covered practicing Sunni Muslim in Maryland, I wish that you do not attempt to interact with me, drop lines, insult or harass me. The majority of you are Black and Christian or atheist. Why would you think a religious Muslim woman would be interested in you or complimented by your foul behavior? I find you nasty and disgusting. When I am at the Subway sandwich shop or Royal Farms and next to pay for my merchandise–you hover and linger at the register when your transaction is complete to make an excuse to stare to get my attention, make a pretext to touch me (“bump”) into me. Black Christian males you reinforce civilized society’s belief you are a threat. Well, because you constantly threaten my safety, your consistent pestering, sexual street harassment behavior have given countless women of color post-traumatic stress syndrome. While you think you have ‘game’ we look at you like the predatory phallic beasts you are–the reality is that you are a constant threat. The only person you impress is yourself with self-delusion (and unintelligible reinforcement by your groupthink/gang/homeboys who do not understand how the rest of the world, including Sunni Muslim Black American women see you) of sexual prowness which demonstrates you operate on a base/animalistic level. Just because your black Christian mother coddled you and reinforced your belief that whites are the sole source of your woes does not give you a pass to harass innocent women who make it obvious they have no desire to be harassed by you by:
1. Not responding to you;
2. Turning away;
3. Cursing you out;
4. Walking away from you.

You set yourself up for rejection by attempting to go after good, decent, educated religious women you have no chance with. Then you get upset with the target of your savage desires. You are not a Muslim (Ive seen the inner city converts-majority of you are just the same as–thugs with elf look claiming to follow Sunnah). If a Muslim was to bend the rules for a non-Muslim man it surely WOULD NOT BE FOR A BLACK ONE.

It is not just solely preference and disgust with your public behavior, statistically and objectively you are a poor choice for a decent woman who wants a beneficial future for a nuclear family and here’s why:
1. While many ethnic American men may not be religious many do respect religion. Black men do not, you do not respect structure, organization, or personal responsibility. Yet, you think you have the right yo access Sunni Muslim Black women because of their value. Our value is strengthened because our religion cultivated us and we know you don’t value the thing  (our beliefs) which helped to make us who we are so surely you will only harm, abuse or destroy us (demonstrated simply by your hostile attitude and the fact you try to “holla” at a covered Sunni Muslim; you wouldn’t dare approach a white nun–period). You are sociopathic bullies who try to intimidate respect out if people, thus do not know what respect is. Yes, many of us are afraid of you. When we see you we see harm; while you are laughing while nothing is funny we are thinking of calling law enforcement. You act like thugs but get upset when decent people stay away from you out of fear and claim racism. Well, I am a decent Sunni Muslim black woman I do the same-I know your modis operendi.
2. Statistically black men rape and sexually assault both black and white women–often. You have no self-control or self-restraint–today’s Black Christian male possess a prominent bestial nature. Thus, you are more proned to harm women.
3. You are ill-mannered and disrespectful in the name of rebelling against ‘the system’ but you only achieve disrespecting Sunni Muslim black and other decent women.
4. You are mysogynistic and view women as property:
a. No you cannot ‘get a smile.’ I owe you nothing. You are a stranger who is invading my space. I do not engage in unnecessary interactions with men generally, especially black ones.
b. No you cannot “holla” at me for “a second.” I will not allow a strange sexual predator to raise his voice at me or “drop lines” to contribute to your insatiable ego. I am not a “shortay” and stop venturing into our suburbs to prey on us. In other words no you cannot “talk” to me. Simply disgusting. You are sloppy, nasty, uneducated and do nothing more than sniff around. You do not belong among humans.
c. It is not flattering to keep clearing your throat, making hacking/hog spitting noises to get my attention. Clearly the only way you are capable of communicating with an actual human being is through these uncouthe, bestial sounds that you presume is some type of mating ritual. Reality check: you are the only one participating stay away from me.
5. 1:4 Black men are in prison, on parole or probation.  This statistic has remained true since the 1990s. You attempt to spread your filth on innocent bystanders and those who actually work hard, live decent and clean lives because you cannot do so. It amazes me how you want to live in the auburbs and have the benefits of this lifestyle but you do not change, you do not develop, you do not believe in God, you drink, gamble, smoke, prey on innocent women, are on the down-low, have multiple baby mamas–then have the audacity to think you deserve a good, decent, well-mannered covered religious Sunni Muslim? You are truly sociopathic, nasty and psychotic and I hope and pray you Black men stay away from me once and for all. Just to make it clear: We don’t want you. Despite your lack if intelligence maybe some of these words will sink in.

6. You hate being Black that is why you disrespect Black women or those you assume to be black or appear to have a gradient of pigment more than white women. You grab, put your finger on and otherwise attempt to touch Sunni Muslim Black women whom you have no right to. You are a STRANGER. Only a being with demonic proclivities or a devilish soul conducts themselve in this manner. You are nasty and evil.

6. You possess the evil eye. I noticed this among many Black Christian men and women. I am not referring to *rolling eyes* because of attitude. There is a specific evil that eminates from the eye that also gives off heat and energy and most people know beforehand that they have an inability to not harass someone who is minding their business. Black Christian men are demonic and in laymens terms you are incline to cause harm or make trouble for your entertainment and devilish pleasures.

7. Why can’t you mind your business. No one is talking to you and you are not “running things.” We know you have a problem with authority, structure and civilized environments because you rarely been in a position if authirity. NEWSFLASH: you do not have authority of me so stop trying to force me to speak with you. Not interested.

Therefore if a woman, including Sunni Muslim Black women do any of the following and you continue your course of conduct  you are a predator an sexual harrasser and assaulter:

1. She ignores you/does not respond.
2. She walks away from you.
3. She rolls her eyes.
4. She crosses the street to get away from you.
5. She looks away or opposite direction.
6. She gets on her cell phone.
7. She begins speaking to a stranger to alert someone you are harming her.
8. She gives a big sigh.
9. She curses you out.

So get a clue: Black man leave me alone.